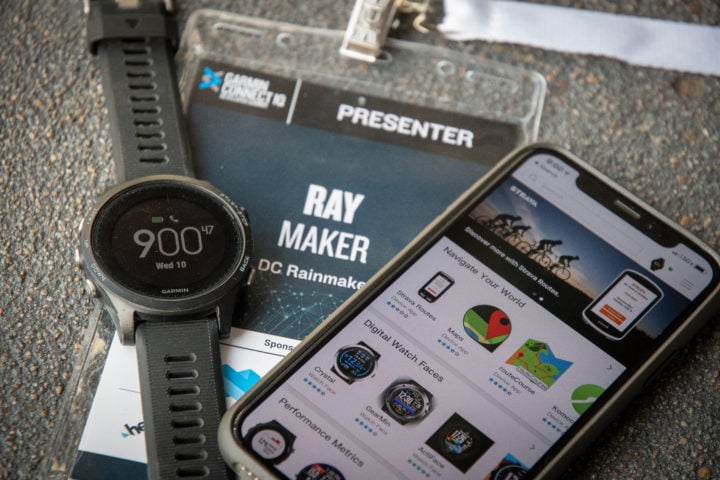 Today kicked off the annual Garmin Connect IQ Summit. This event takes place at Garmin’s headquarters in Olathe, KS and attracts sports and non-sports partners, and 3rd party software developers for their Connect IQ teams. You’ll find everyone from TrainingPeaks to TrainerRoad, and Spotify to Mastercard. Like Apple’s WWDC conference, anyone can sign-up to go, and in fact, a small percentage of people are more enthusiasts than straight sports tech entities.

This conference traditionally is, as the name implies, about Garmin Connect IQ – their software development platform for some 50 different units at Garmin. Specifically within that, explaining Garmin’s vision each year for what lies ahead, and announcing a slew of new technologies. While some of what I’ll discuss today and tomorrow may sound geeky – the implications are usually very concrete for consumers.

For example, last year’s announcements around Connect IQ music providers are what paved the way for Spotify integration that was announced this past fall. In fact, one could strongly argue this conference was the turning point in convincing Spotify.  Similarly, some of the announcements you’ll see today and tomorrow that may be developer focused will instantly turn back around to having a concrete consumer feature/benefit. Especially tomorrow.

With that – note that this year Garmin has split up their announcements over the course of two days. A pile announced today, and yet another pile set to announce tomorrow. In fact, I’d argue the announcements I’m most excited about are slated for tomorrow. Some of which have instant benefits to you as end consumers, but also some of which have substantial (good) implications for developers. Thus, stay tuned? 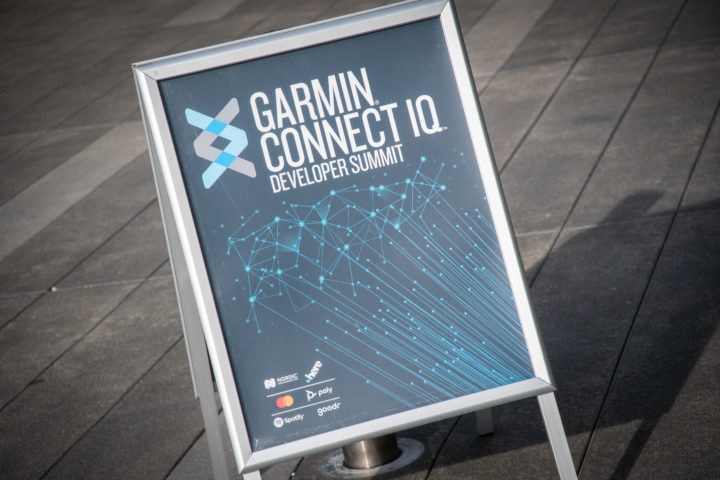 Since Connect IQ is developer focused, most announcements are in that ballpark. While hardware has occasionally been announced at the same time (such as last year with the Edge 520 Plus and Varia RTL510 radar), that isn’t the case for today.

Instead, I’ll start with the most consumer-focused change for today, which is the splitting out of the Connect IQ app store into its own separate iOS and Android apps. Fear not, you can still use the old ways if your device isn’t supported, but the new store is designed to make it easier to find apps.

This has been a long project in the making for Garmin, aimed primarily at just making it easier to find apps on the app store.  As of today, there are some 5,000 Connect IQ apps from over 2,000 developers in the program. That’s a lot of stuff to sift through. Further on the stat-dropping front, the company says that they now have 10 million Connect IQ enabled devices in the market, accounting for over 90 million Connect IQ app downloads (keep in mind though, version updates would count as a re-download).

Still, there’s a reality that the current Connect IQ app store wasn’t super mobile friendly, and definitely not aimed at helping folks find the apps they didn’t know existed. With the new app store, you’ll be guided a bit more into finding apps that you didn’t otherwise know might fit the bill. They’ve got a large list of logical categories within there for you to browse through.

While it’s probably not super exciting per se, it should help developers making apps have a chance their app might get found more easily. Further, some previously separate apps like the Face-It watch face builder (where you can take pictures and make watch faces out of them) are now incorporated into the Connect IQ App:

These two apps (Android and iOS) are now available immediately in their respective app stores. Further, here’s the list of compatible devices for the new app store. Note that devices now on this list can continue to use the existing app store without issue. Nothing changes there. It’s simply that those older devices don’t have the firmware capable of talking to the new app. Garmin has quietly updated all the devices noted below over the last 12-18 months to be compatible with the new app:

Got all that? Good, let’s keep cookin.

Next, Garmin now has an animation framework within Connect IQ 3.1. This allows app developers to create animated GIF-like things within their apps. While there are plenty of potential uses for this, the most obvious one is really around instructional bits. For example, on Fitbit Versa/Ionic devices, you can get gym instructions for how to do a specific gym movement (like a squat). But you couldn’t really replicate that on the Garmin side.

Now, animations support that concept. At a super basic level, here’s what that looks like on a watch. Again – it’s not about the animation below, it’s about what developers could do with this.

The platform/tools also allow developers to easily convert videos into these animations. This could be used for things like step by step instructions. For example, one could see the value of this in aero testing apps that want to demonstrate how to do a specific body movement (like shrugging your shoulders or moving your hands in a certain way over the front of the aerobars).

There’s nobody in the sports tech business that has as robust a community forum as Garmin. Granted, it’s full of people trying to get help with things – but that’s sorta the point of product support forums: self help. Still, a few years back Garmin switched forum platforms, and it’s fair to say things weren’t/aren’t awesome with the current implementation. I personally gave up on interacting on the forums as I couldn’t find anything. Note that during that timeframe, Garmin did ramp up the number of actual Garmin employees in the forums – so that helped a bit.

Still, Garmin’s apparently heard that negative forum platform feedback from many, and as of today they’re rolling out a new forum. Specifically today, they’ve enabled the new forum for Connect IQ discussions. Expect that to expand in short order to the rest of the Garmin realm once they stabilize a bit. 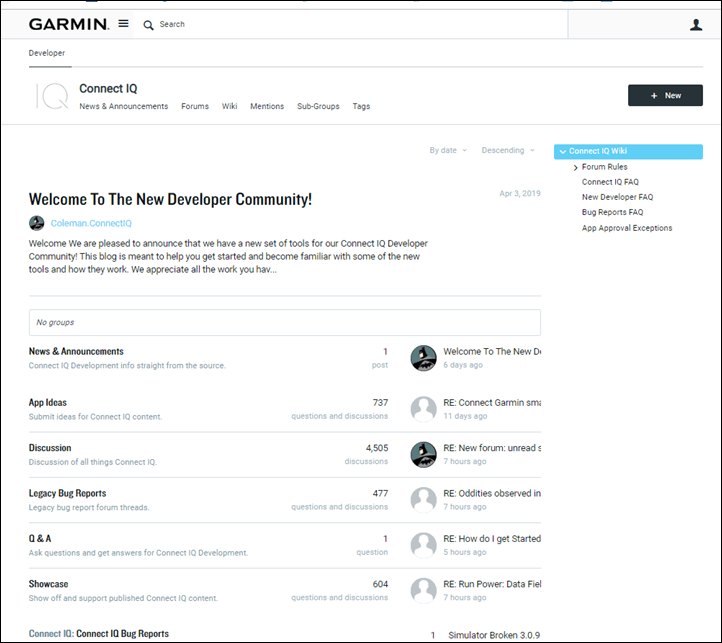 Not sure there’s much more I can say about that. I haven’t spent much time there yet, so will be interested to hear your feedback on it over the next little while.

Finally, saving the most..errr…least…exciting thing for last, ERA. This is Garmin’s Exception Reporting Application, which enables developers to start getting data back from their own apps that have crashed or otherwise gone sideways.  This will be available for any app published to the Connect IQ app store, to developers for their own apps.

Note that this won’t show side-loaded apps (.PRG files, often shared in early development circles). Nor will non-store compatible devices show up, so things that Garmin hasn’t announced yet won’t be seen here either (since I know someone would ask). Of course, both of those are logical exceptions.

Like I said earlier, some of these things aren’t super exciting to consumers – but are super useful to developers. And if developers can understand how often their app is crashing/erroring and why, that enables them to fix it – which ultimately benefits consumers. Oh, and note per above – no personal information is shared back to a developer. What you see above is exactly what the developer gets back. Just summary information. 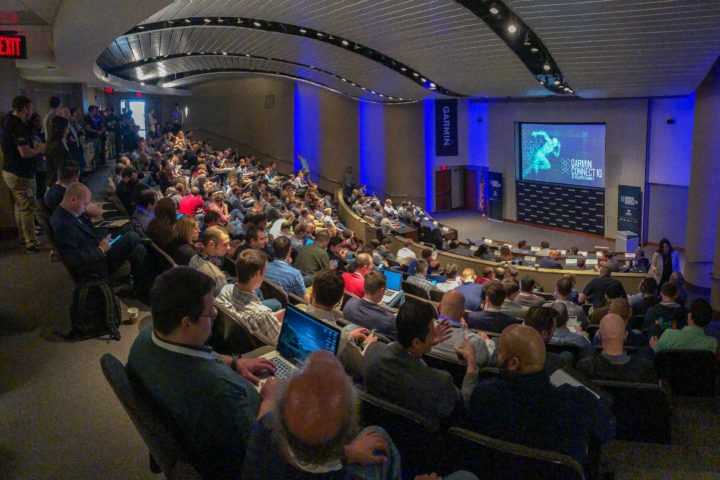 In fact, depending on when you see this post, you should be able to tune in live on my Facebook Page, or, watch it back from the beginning – assuming all the magical technology works. I’ll also likely upload it to YouTube as well in the coming day or two.

Finally, tune back in tomorrow for the really juicy announcement stuff. I think that’s the pieces I’m most excited about.