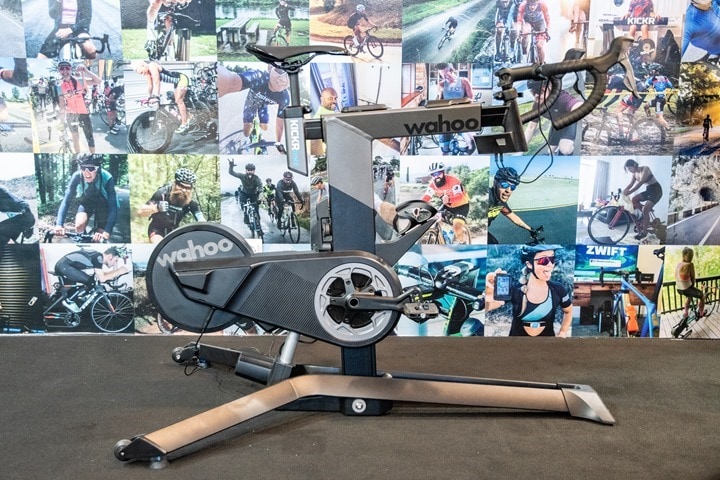 In a move that probably shouldn’t surprise anyway – Wahoo has joined the indoor smart bike fray, with their new KICKR Bike. This unit is far more though than just a KICKR and a CLIMB squished together on an L-shaped chunk of metal. It’s actually an entirely new KICKR design, one that far more closely resembles that of the electromagnetic unit that is the Tacx NEO series, than that of the KICKR’s of past. And while the CLIMB is similar, this one has greater depth than its standalone sibling.

But none of this will come cheap. The bike comes in at a staggering $3,499 – the most expensive indoor consumer-grade smart bike on the market, announced today or previously (and the Wahoo bike is the last unit on the new indoor bikes lineup at Eurobike).

But you know what? I’m impressed. No, not with the Wahoo Bike pe se (though I am on that too), but with the fact that they managed to keep it under wraps until this morning. In some cases – literally. No, really, on the show floor at Eurobike it was under gigantic confidential boxes until the unveiling. But more impressively from the 100+ units out in the wild this year in various peoples homes all around the world as part of their KICKR Bike testing program.  It’s that testing program that Wahoo hopes will give consumers more confidence in this product after some of their hardware related challenges this past winter.

I’ve had various cases to test the bike over the past year, culminating in a ride on the final version last week. This post isn’t a review though, just a bit of an early hands-on look. I’ve got a final production unit set to be delivered straight from the factory in the next few days that I’ll be working on for my final review. It’s in that I’ll cover things like power accuracy and broader app compatibility and integration. If the unit arrives in the next couple days as expected, then look for my review in a few weeks.

With that – onto the details! 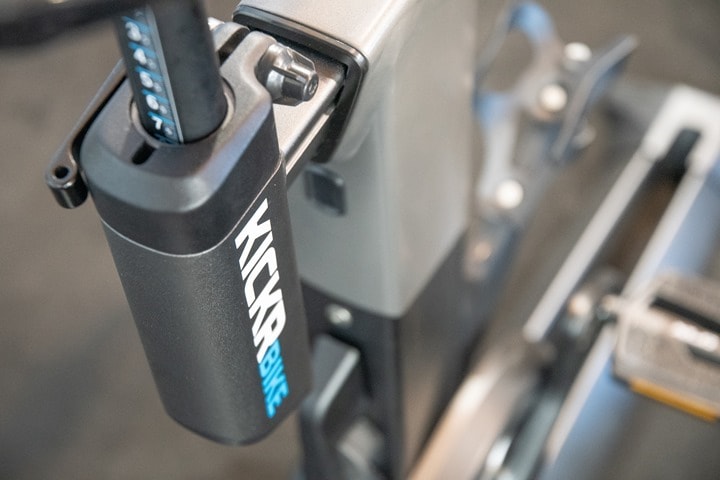 No better place to start any indoor training device than the tech specs, after which I’ll walk you through the bike from front to back, every single part with all sorts of details you probably didn’t need to know.  Now as I noted earlier this morning on the new Stages Bike, some of these specs will be familiar to trainer folks, whereas you’ll find a new slate of specs that we need to start being aware of as more bikes hit the market. Things like supported crank lengths, adjustability limits, and handlebar extensibility. But first, let’s start with the more common trainer-based metrics:

Ok, with the specs out of the way, let’s start at the back of the bike and walk through all the components. First up we’ve there’s the flywheel in the way back, when it connected via belt drive to the crankset that sits underneath you. From a noise standpoint, as you can hear in the video, it’s super quiet– with only the slightest of hum. 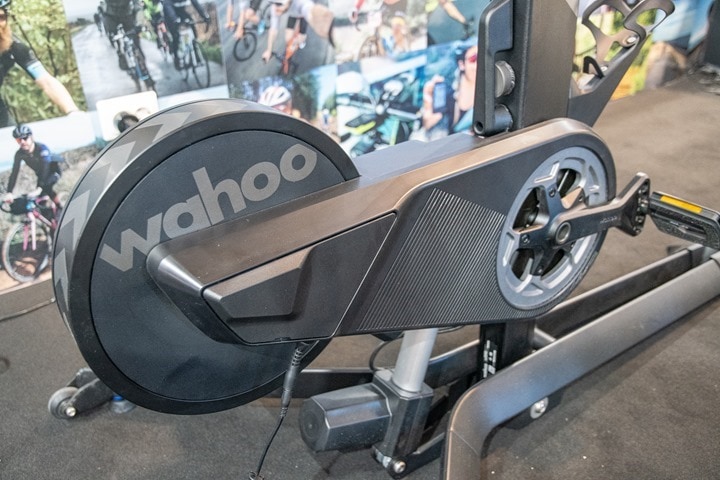 Down below all that are two wheels, allowing you to roll it around as you see fit:

In between the crankset area and the base wheels is the actuator for the Wahoo CLIMB, which is built into the bike. This enables the bike to simulate grades of 20% upwards, and –15% downwards, pitching the entire bike from the center point, rather than just the front of the bike like with the Wahoo KICKR CLIMB 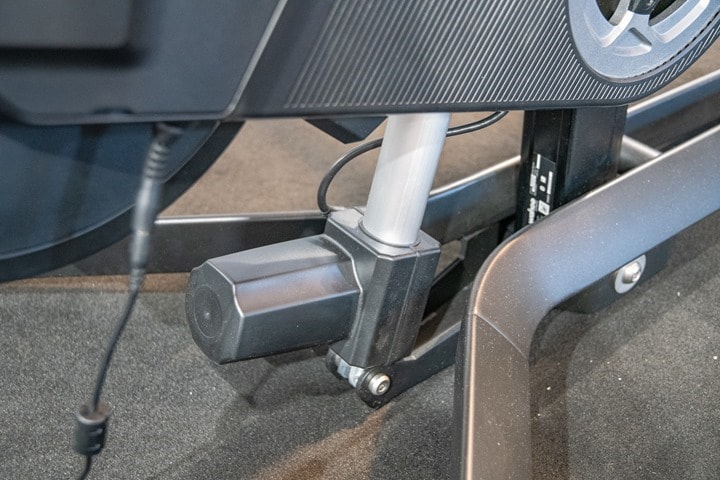 Next you’ve got the crankset, which includes a five-holed arm that allows you to specify a crank length of 165mm, 167.5mm, 170mm, 172.5mm, or 175mm. You can pick the pedal of your choice and you’re off and running. Exact same design as the Stages Bike. 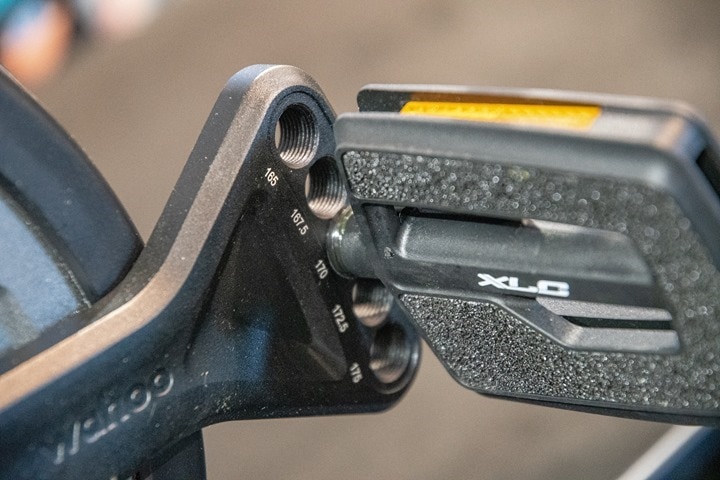 From an adjustability and fit standpoint the unit has levers at numerous spots to tweak your bike fit. Specifically:

You can see the levers throughout the bike: 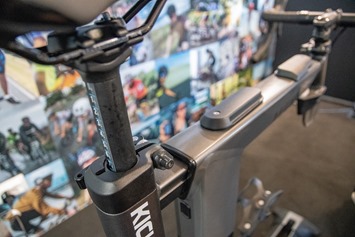 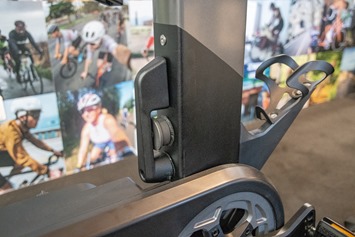 This isn’t terribly different than anyone else. However, what is unique here is the fit system. All of this is done via the Wahoo app, which helps setup your bike. Rather than you play a guessing game, there’s three core ways you can setup your fit:

Here you can see for example what happens when I choose to use one of the fit providers: 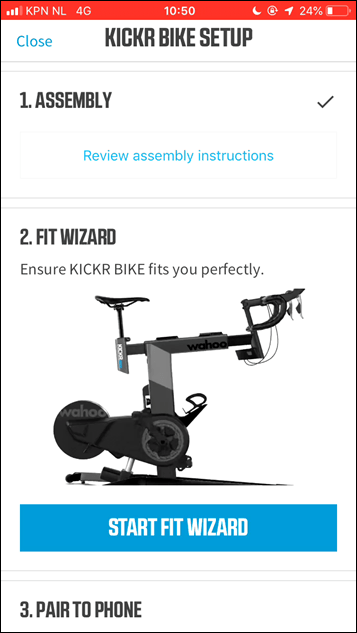 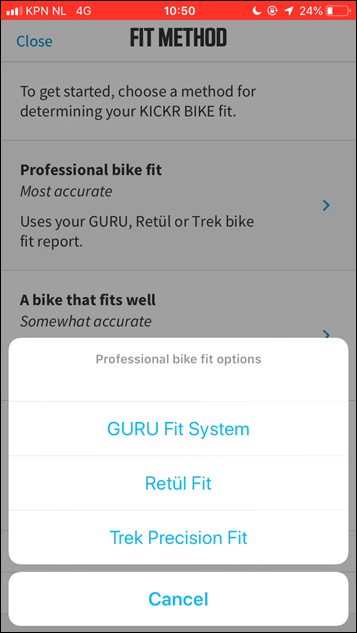 Which then allow you to put in the exact specifics of that particular provider: 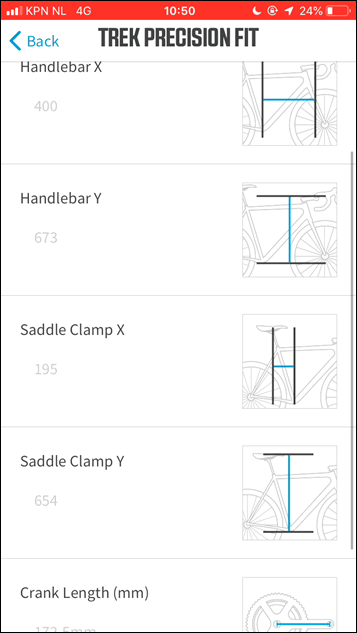 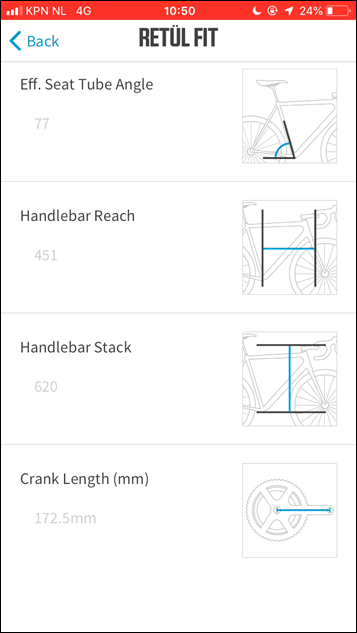 Or in this case, choosing to scan my bike, or simply elect to put in my height measurements: 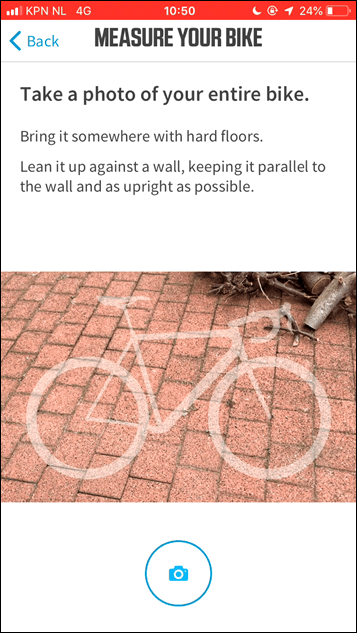 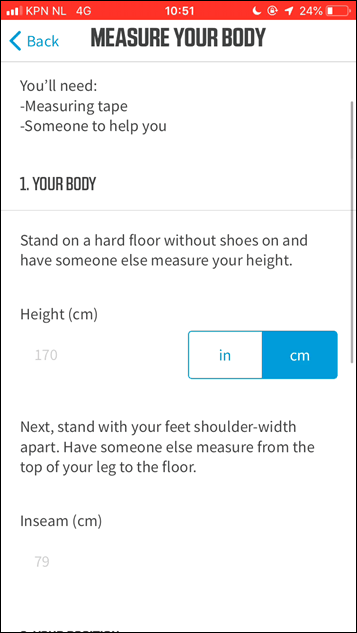 This same app-driven concept expands even further when you get to the shifting. Up front you’ll find the shifters and brakes. These shifters mirror traditional shifters, rather than button-driven ones like most of their competitors. So it’ll feel just like a normal bike. The upper buttons control the CLIMB up/down, while that inside button is for steering (left or right, depending on the side). 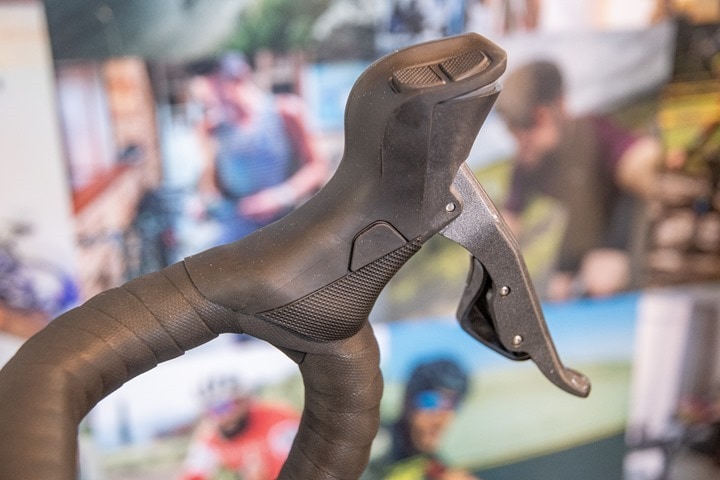 That concept is carried through to the app where you can select which shifting type you’d like: Shimano Di2, SRAM eTAP, or Campagnolo. And then from there you choose the exact crankset configuration you want, from chainrings to cassettes. You’re basically mirroring your real bike inside the app: 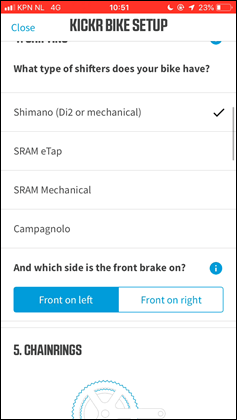 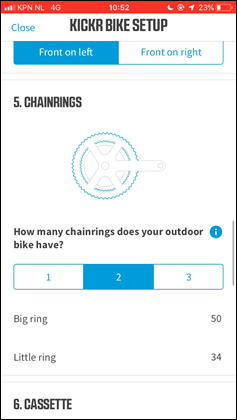 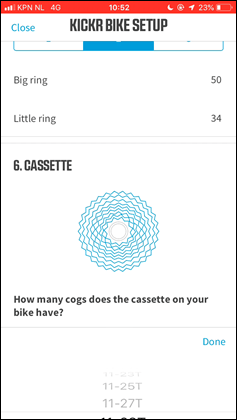 At the base of the handlebar system is a small display screen. This display screen shows your current shifting position, and when the CLIMB goes up and down, it shows you the % of incline. 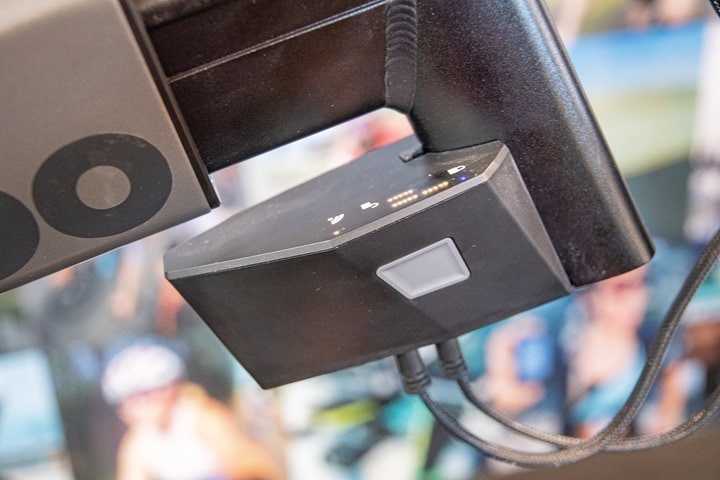 In my opinion, this is the only part of the bike where things are a it of a let-down. Looking down towards your crotch to see the shifting position isn’t really ideal at all. And at this point it isn’t yet showing gear indication on Zwift either (like the Wattbike Atom), though I suspect that’ll change soon.  Next to the display is a small button to lock the CLIMB from going up and down.

Finally, note that there’s a single USB port to use for charging: 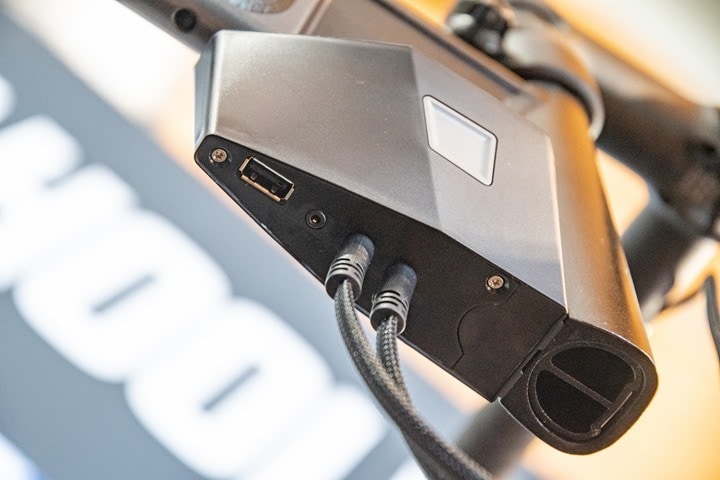 Though there isn’t any form of tablet holder or such here, nor any place to put your phone – again a weird oddity compared to every other bike out there. Wahoo says they’re looking to have an accessory at some point in Q1 2020.

So with all the specs behind us, what about actually riding it? Well, for that I’d refer you to my video above – where I show you how well it works and walk you through a few of the concepts in real-time in the middle of Zwift.

However, a few bulleted thoughts like I did for the Stages Bike earlier this morning:

– The biggest takeaway I had was ‘clean’, everything just feels so clean and smooth on the bike itself
– The drivetrain feels great, and there’s zero weirdness in the pedal stroke or grittiness, again clean
– The adjustability levers are easier than the Tacx Bike, but I do worry they’ll scratch the frame over time (the unit I tried last week scratched, but there may be minor tweaks to come there)
– The app based customization is the real star of the show with the Wahoo Bike. It’s miles ahead of what anyone else offers. Many, many miles.
– The CLIMB going up and down is more or less the same as the existing CLIMB, so if you’re familiar with that, it’s roughly the same here
– The downhill drive on the KICKR Bike drives forward the downhill sensation, roughly like the Tacx Neo series. Feels pretty similar
– Shifting was great, super quick. Loved the fact that it uses real-life shifters and that they match my preferences (SRAM eTAP in my case)
– Brake levers were also good, though Stages has them beat with actually making it impossible to pedal when you hold the brake levers tight (like a real bike)
– The lack of display holder or such is a huge disappointment
– The lack of place to put my phone – also a huge disappointment
– And finally, the position of the shifting display is a bit awkward. I’m sure it’ll get better as apps adopt gear shifting display for the bike
– Overall ride feel though is very good, pretty happy with that.

Ultimately, this feels like a blend of a KICKR and a Tacx NEO, which is mostly what it is from a technology standpoint. All in all it feels good, but again – I’ve gotta keep saying that the app based pieces are so far beyond what anyone else is doing today, and they make a real difference on the bike.

Ahh yes, you wanted it – a complete chart of competitive specs. After all, this is the Eurobike of the indoor smart bike, and there’s no better place to highlight all these specs than the DCR Comparison Database and Charts. So I’ve slated up all the big competitors into the chart below. This chart will automatically update over the course of the day as new offerings are announced:

Oh, and before you ask why I haven’t included some products into the above – here’s the quick and dirty answers:

Peloton Bike: It’s not a ‘smart’ bike in the sense of the above, it doesn’t allow you to set a specific power level (it does tell you the current power level). Rumors are Peloton is working on such a bike, but nothing today.

SRM Bike: This was also announced today, with full smart integration. I’ve got a chat with them in a few hours. Stay tuned!

True Kinetix Bike: This will likely be in the above chart by the end of the week. They’re planning on shipping me a test unit in the next week or two, and I’ll be meeting with them this afternoon. I just want to get a clear understanding of timelines and capabilities (specifically the ANT+/BLE bits) before I add them above).

VirtuPro: It could also get escalated into the above chart, I’ve talked about it in the past. But I need clarity on when they’ll (actually) ship it with ANT+/BLE support, and realistic timelines to that. Else, it’s a proprietary solution that doesn’t really fit what the tables are designed for (the rest of the bikes here are compatible with all industry protocols).

Again, I’m more than happy to add products into the database. In general, my rule of thumb is I want hands-on time (or butts-on in this case), and I want some realistic level of clarity on delivery timeframes. 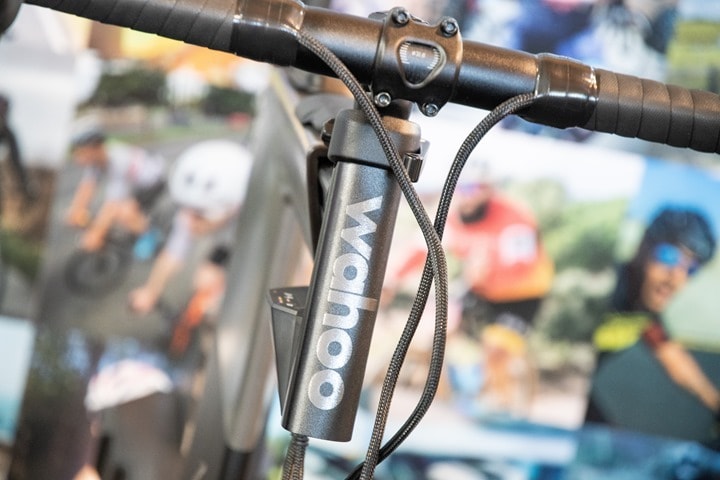 There’s zero question this is an impressive piece of hardware…and software. The initial ride feel is great, and the crispiness of the system is one of the best. The fact that it mirrors my bike in any way I want it to – from the exact shifting setup to the chainrings, is huge. Of course, with that comes one heck of a price tag – the most expensive indoor consumer bike out there – $3,500USD.

Of course, the real challenge for Wahoo will be production. Not so much quality, but just throughput. They’ve set expectations early that there will be limited stock this year. Some units may actually squeak out to early order as soon as next week, but retailers are being told to expect limited supply in October – and continued limited supply the remainder of the year. Only certain geographies are getting supply at launch, with more locales to follow in 2020.

I’m keen to get it into the DCR Cave in the following days and put it through its paces from an accuracy standpoint. After all, this is totally new technology for Wahoo from the ground app. About the only thing that’s carried over here from the previous generation units is the Wahoo logo. The electromagnetic resistance design, the actuator system for CLIMB, the shifting – everything is new. And as we know know, new carries risk. Wahoo believes they’ve mitigated that risk with the largest program they’ve ever had of beta testers globally pounding on bikes for almost a year all-in. Time will tell whether that’s the case.

With that – stay tuned for plenty more to come, and thanks for reading!